Tunisia’s main opposition coalition has demanded that President Kais Saied resign after parliamentary elections were attended by less than 9% of eligible voters.

The majority of opposition parties boycotted the election. 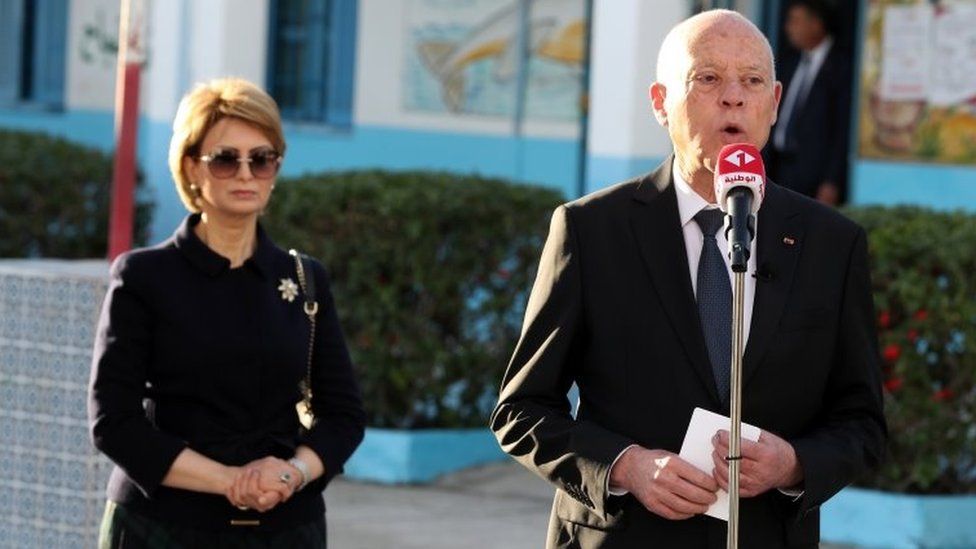 They accuse Mr. Saied of undoing the democratic gains made since the 2011 uprising, which he denies.

After dismissing the prime minister and suspending parliament in July 2021, Mr Saied pushed through a constitution enshrining his one-man rule in a vote boycotted by the main opposition parties a year later.

The new constitution replaced one drafted shortly after Tunisia’s overthrow of late dictator Zine al-Abidine Ben Ali during the Arab Spring in 2011. It gave the president full executive authority and supreme command of the army.

Tunisian President Kais Saied (right) speaks to reporters after casting his vote in Tunis with his wife. Photo: December 17, 2022
SOURCE IMAGE,EPA
Caption for an image,
Kais Saied (right), a former law professor, has been in power since 2019.
Mr. Saied, 64, believes such powers are required to break the cycle of political inaction and economic decay.

His supporters agree with him, claiming that the impoverished North African country requires a strong leader to combat corruption and other major issues impeding development.

“What happened today is an earthquake,” Mr Chebbi said shortly afterwards. “From this moment, we consider Saied an illegitimate president and demand he resign after this fiasco.”

A coalition of several political parties, the National Salvation Front, has also called for mass rallies and sit-ins.

So far, President Saied has made no public comments on the matter.

Tunisia’s uprising 11 years ago is frequently cited as the sole success of the Arab Spring revolts across the region, but it has not resulted in economic or political stability.